On the night of March 18, 1990, a pair of thieves disguised as Boston police officers entered the Isabella Stewart Gardner Museum and roamed the Museum’s galleries, stealing thirteen works of art. 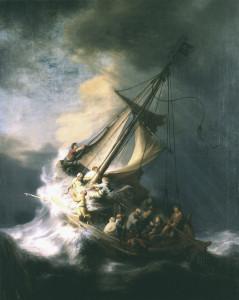 Recently, millions of viewers were shown the secret hiding place of at least one of these precious works of art.

Rembrandt’s Storm of Galilee resides in the home of Raymond Reddington, an international criminal who teams with the FBI to take down nefarious criminals.

Actually, Raymond Reddington is a character on The Blacklist, a fun show on NBC which is headlined by James Spader.

A friend just got me hooked on the show and I’m starting with Season 1 on Amazon Prime. Great show, by the way.  But I nearly dropped my teeth when I watched Episode 6 and saw the James Spader character leaning back in his armchair, absorbing the beauty of Rembrandt’s Storm of Galilee!!

The book I’ve just written, The Fine Art of Deception (coming soon!!!), a paranormal romance mystery, is also the back story to the biggest unsolved art heist in the US. One of the 13 pieces stolen? Rembrandt’s Storm of Galilee.

Well, clearly The Blacklist is a work of fiction…