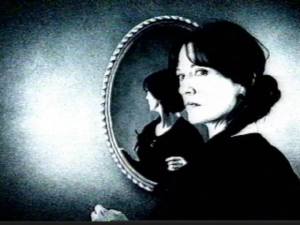 “Look, Emma. We’ve all been there. We’ve all been cheated on or left behind.” A small surge of adrenaline jumped across my heart at the thought of Jeremy, my former fiance’ who had left me for none other than my best friend at the time. My reaction surprised me, it had been so long, I really thought my heart had healed. “Or in my case cheated on and left behind. But we have to move forward,” I said.

Emma placed her chilly, transparent hand on my arm. She must have read my story on Jeremy as I reflected on it.

“I don’t know how to move forward,” she said honestly. “All I can think about is that day when I arrived at the church, the way people looked at me. The pity in their eyes. I stood in the vestibule while my father came to me, told me that Albert wasn’t coming.” Emma’s anger started to build again and I could tell I was losing her to the past once again. “He said we had to leave. We came home, my mother helped me change out of my wedding dress and I never left this property again.”

“Emma, Albert is dead,” I said abruptly and tried to break her habit of reliving the event that held her in the past.

I nodded in the silence and she turned back toward the window.

“I wanted to kill him myself.”

And I really did. I tried to hold my laughter in but a tiny smirk appeared on my lips. Emma caught sight of it when she turned toward me and she smiled a little, too. I think it must have been her first smile in over a 100 years.

“Men are pigs.” Merrilyn chimed in from the middle of the room. And that did it. The three of us burst out laughing so hard that we all doubled over.

“Oh, if you only knew how many times I imagined his death at my own hands. And in so many painful ways.”

Our laughter bounced off of the empty walls and wrapped around us in the vacant room until it gave way to intermittent giggles.  I watched Emma closely to make sure she stayed with us mentally and emotionally.

“He’s very lucky he never came back to Savannah,” she said. “Because I waited for him, you know.”

The corners of Emma’s lips tipped up as her head lowered just a bit. “I just wanted to invite him over for tea,” she said calmly. “To let him know that I forgave him.”

“Yes, I picked fresh oleander leaves from my garden every few days while I waited for him.”

“I think she knows that.” I whispered in return.

“It’s a Southern specialty. My Grandmother served Oleander tea to several Yankee soldiers during the war.”

“Never cross a Southern woman,” Merrilyn said and took a few steps back.

“I can’t seem to figure out how to move on.” Emma pressed her dress absently.

“I could help you.” I said. But before I could start Merrilyn walked over and elbowed me in the side.

“The people downstairs,” she whispered.

“Oh, right. Emma, there are a lot of um, spirits downstairs. Do you know how they got there?”

Emma looked a little sheepish. “I stand here at the window and call them in.”

“You bring them here”

Emma nodded and looked out the window again.

“Trying to offer a little refuge?” Emma nodded once again.

“I’m going to help you home, Emma. But when I do, I want you to tell your guests they need to go with you, okay?”

Emma smiled, and I could tell she would help. The three of us walked downstairs together, Emma’s frosty aura accompanying us.

When we reached the main room  Emma waved her arms to bring the spirits together and told them they would be taking a trip together. When one young child asked where they were going, she said, “Someplace where it doesn’t hurt anymore.”

There was a collective murmur of excitement among the group and the lights flickered several times in the wake of their energy. I crossed them over quickly and the air pressure in the room shifted immediately.

“It feels like we’re the only ones left in the house again,” Merrilyn said with a heavy exhale.

Merrilyn and I walked outside to the wide, front porch and sat on the steps. “Thank you,” she said as she hugged me. “This business is all I have right now.”

I smiled and hugged her back. “Just don’t tell anyone about this.”

She elbowed me. “New York has made your paranoid.”

“Life has made me paranoid.”

“You know that’s the difference between the North and the South. In the North no one wants to have anything to do with people who walk in more than one world. They call them crazy and tuck them away where no one can see them. In the South we trot them out on the front porch with pride and call them eclectic.”

“Ah!” I yelled and tickled Merrilyn in the ribs until she fell back onto the painted wood and begged for mercy.

I loved the friendships I’d forged in New York, but nothing came close to precious friendships of my childhood. They would forever have a place in my heart.

“You did a lot of good today, friend.” Merrilyn said as she rocked her shoulder into mine.

“I was just thinking of Emma. How easy it is to get stuck in the past by hanging on to hurts and -.”

“Yeah. You know it’s been a while since he ran off with Catherine. I wonder how many times I’ve been over their betrayal in my mind. Thousands. Millions of times, probably.”

“Not as many times as Emma, though.”

“My father says that you shouldn’t try to find logic where there isn’t any.” Merrilyn said. “You just have to accept crazy when you see it. Don’t pick it up and carry it with you. It’s not yours to take.”

“I love your father.”

“Look,” I pointed to the delicate, white blossoms that grew on the sprawling green bush planted beneath the live oak tree.

“Oleander,” Merrilyn said. “She was really going to poison him, wasn’t she?”

“Oh yes. She was. What’s that saying about a woman scorned?”

“I think they say ‘hell hath no fury like a Southern woman scorned’.” 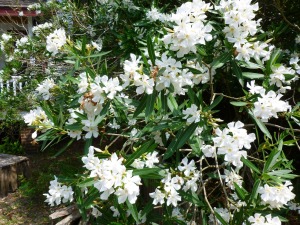